NB This is a guest post by our awesome intern Rae Jeffries-Harris, describing part of the work she did with our Bristol team over the summer. Thanks Rae.

A lot of Java programmers are familiar with building RESTful web applications using frameworks such as Jersey which adhere to the JAX-RS specification. JAX-RS abstracts much of the low-level detail away from the programmer, so that tasks such as client-server communication become less fiddly.

But you still have to have a server running night and day, scale it yourself etc. All things which the new Serverless architectures can take off your hands. Ideally you’d be able to deploy a JAX-RS application as a FaaS application, allowing you to have ‘the best of both worlds’. A simple to build and cost efficient application. It’s important to note that here the term FaaS application is used to refer to an application composed of multiple functions, this will have more meaning soon.

A framework has already been developed specifically for this purpose. An open source project developed by Björn Bilger, JRestless is an impressive tool that allows you to wrap up a Jersey application and deploy it as a serverless function using a variety of different platforms

JRestless initially targeted running on AWS Lambda but has since added OpenWhisk support, and through this PR now can run your JAX-RS apps on the Fn Project which was recently announced at JavaOne in San Fransisco.

If you have seen JAX-RS code before then none of this will be a surprise:

Standard stuff from a JAX-RS perspective, but isn’t it neat to have three separate functions defined in one place with shared DTO and database code? This is what we alluded to earlier: a FaaS Application - not just a standalone Function which does one stateless thing in isolation but a coherent application built on a more flexible foundation without sacrificing its integrity.

The only extra code you need is a class acting as an entrypoint to your function, which defines which classes Jersey should consider as part of the app:

Extending FnRequestHandler means we can specify the entrypoint in our func.yaml like this:

In response to the first request, JRestless initialises Jersey with the ResourceConfig provided (ResourceConfig extends Application which defines a whole JAX-RS app). We recommend you use Hot Functions to amortise the cost of initialising Jersey.

Then JRestless provides a mapping from Fn to Jersey so that from the point of view of your app it is just serving regular HTTP requests and returning responses as usual. Feel free to use MessageBodyWriters, ExceptionMappers, etc. 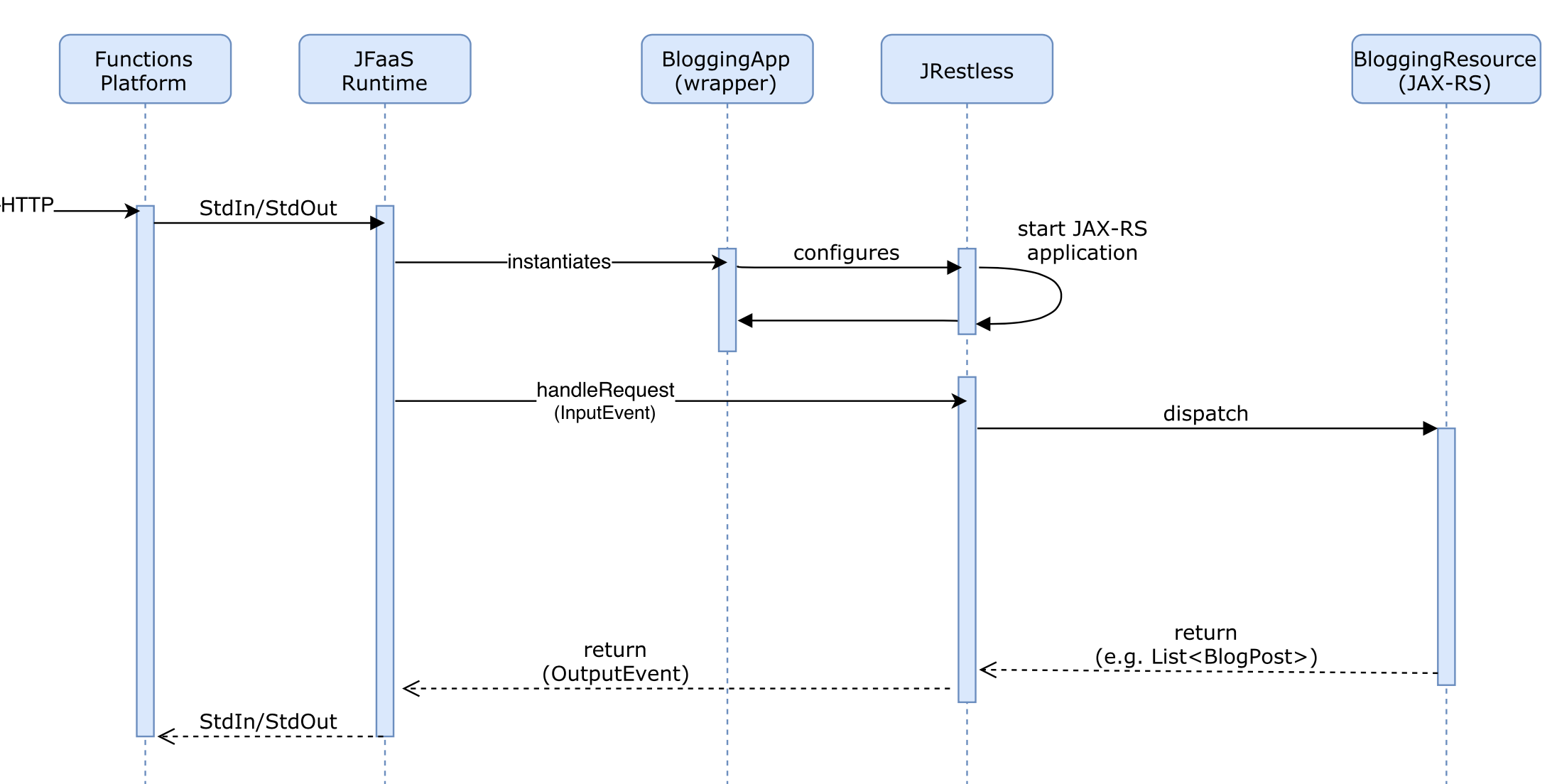 FaaS Applications can be difficult. A function is normally a single entity that doesn’t rely on any external state so composing these functions in ways to make coherent applications is challenging.

The stateless designs encouraged by JAX-RS mean that many applications fit very nicely into a FaaS platform. JRestless makes this easy to do, with minimal boilerplate.

For more detail, please see the example app which details build and deployment of an app onto an Fn server.